The City Park neighborhood is one of Denver's most popular neighborhoods. Three major developments -- City Park, East High School and Mercy Hospital are particularly significant to the area's history. 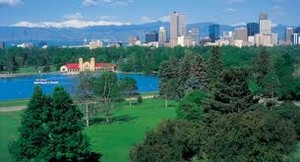 After the City of Denver purchased City Park from its original owner in 1889 for $56,000, the park board set about the task of seeding part of the area in grass, since there were few trees and the vegetation consisted of buffalo grass, sage brush and cactus. School children helped in the task of beautifying the area by making the planting of fast-growing cottonwood trees their Arbor Day project. But trees, flowers and lawn were not enough for Denver residents. A bandstand was constructed to accommodate concerts, a race track was built and quite by accident, the zoo was established when a city employee donated his pet bear cub which persisted in breaking its chain and killing his chickens. The bear became such an attraction that other Colorado animals were added, and later by popular demand, species from all over the world were included. Later, a group of citizens purchased an exhibit of bison and other fauna of the mountains and established the Colorado Museum of Natural History. Today, the museum contains one of the finest collections of native animals and birds, exhibited in their natural habitats, in the country. With the addition of an electric fountain in 1908 and numerous donated statues and gateways, the park became a focal point of Denver.

The second development of significance to the neighborhood's history occurred in 1925, with the construction of the new' East Denver High School at 1545 Detroit Street. A 20-acre site adjacent to the City Park Esplanade and East 16th Avenue was chosen to repeat the architectural triumph of the old East High, (presently the site of the New Custom House). The magnificent structure was built to accommodate more than 2,100 students, and was furnished with the latest in modern high school equipment. The school's central clock tower is 162 feet high and is situated to be visible along the length of East 16th Avenue.

Today, City Park contains playground equipment for children, a miniature railroad, two lakes, handball and tennis courts, horseshoe pits, a zoo and the Museum of Natural History. It remains a major attraction to both city residents and visitors alike.

See below for the latest homes for sale in City Park or call today to begin your search!

As the crown jewel of Cheesman Park, Park Tower has resided over Cheesman since 1981. This is a once in a lifetime opportunity to to own the entire floor. Through the co...

New to market! Well priced condo in one of Denver's most historic and desirable neighborhoods. Charming unit with private entrance to third floor walkup. Must see ~ unit ...

Welcome home to this highly sought-after condo located in the heart of City Park West just minutes from the iconic City Park. This Villa Riva complex has only 24 units an...

This renovated one bedroom, one bathroom condo is the perfect place to come home to after a day of adventuring. Situated just two blocks East from Cheesman park and two b...

Only 30 years younger than the city itself, 1640 N. Humboldt is your opportunity to travel through the looking glass and own a fragment of Denver's history. Wonderfully m...

Centrally located in The Wyman Historic District on a large lot, 1645 Race Street is an exceptional Queen Anne Victorian. The wrap around porch adds a unique architectur...