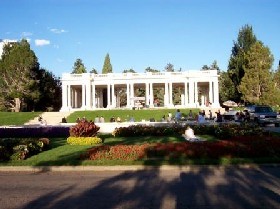 The Cheesman Park neighborhood is one of Denver's oldest residential areas - dating back to 1868. By the end of the 1880s, the entire neighborhood was platted and sparse development had occurred.  The neighborhood was almost totally developed by 1915, and was characterized by large homes for the wealthy.

Cheesman Park and the land that is now the Botanic Gardens was given to the city for use as a cemetery in 1872 by a congressional grant. In 1893, Congress awarded a grant to permit its use as a park. The early burial ground in Cheesman, called Congress Park until the 1930s, was then removed. It was not until 1938, however, that the city finished removing tombstones from the Botanic Gardens and the arboretum development began. During the Speer administration, the Cheesman Park Esplanade was acquired and the Seventh Avenue parkway was developed.

By the 1930s, the Cheesman Park neighborhood had become primarily an apartment district. The percentage of home owners has decreased steadily until, in the 1990 census, only 7.2 percent of the housing units in the neighborhood were listed as owner-occupied.  Population density is now among one of the highest in the city. Cheesman Park is a complex and changing neighborhood that is in many ways a microcosm of the city as a whole.  Its condition is improving because of an active and vital private market.

See below for the latest homes for sale in Cheesman Park or call today to begin your search!

The stunning brick exterior of the classic Capitol Hill condo highlights the charm of this classic Denver neighborhood. The unit features great natural light and a wide o...

Breathtaking Views of the Downtown Denver Skyline, Mountains and Cheesman park will enchant you from walls of glass the moment you enter this stunning condo. The elevator...

Nestled high above the Denver tree line, this Cheesman Park West Condo is Denver living at its finest with million...make that billion dollar views! Spacious and luxuriou...

Courtesy of The Steller Group, Inc

Courtesy of The Steller Group, Inc

DON'T MISS THIS GORGEOUS CONDO!! Right on the edge of Cheesman Park in the heart of Denver, this unit has everything you could want. Well maintained with an open floorpla...

A rarely available Victorian home just steps from the Denver Botanic Gardens. Built in 1898, it has all of the turn of the century Victorian charm. Lovely wood flooring t...

Courtesy of Your Castle Realty LLC

Courtesy of Your Castle Realty LLC

This main floor condo has not been offered for sale for more than 30 years! You will fall in love with this European influenced building architecture. Interior designer...

This gorgeous 1894 Denver square lies just STEPS from Cheesman Park! Incredible curb appeal and a freshly painted exterior welcome you to 1325 Franklin Street. You can wa...

Hello City Living with Space, Views, History, and LOCATION! This gorgeous historical home has so much original charm with the ornate woodwork, solid craftsman doors, and ...

Best price in Downtown. Affordable Capital Hill/downtown loft opportunity in the beautiful Colonnade Building. Close to the center of activity- the Capital, Civic Park, a...

Courtesy of THE DENVER HOME TEAM

Courtesy of THE DENVER HOME TEAM