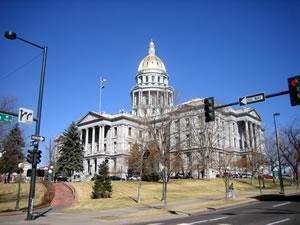 Capitol Hill is one of the oldest residential areas & one of the most desirable neighborhoods in Denver! It is just steps east of the Capitol building in downtown Denver - hence its name, Capitol Hill. Development of the neighborhood began thanks in large part to the work of two men, Horace A.W. Tabor and Henry C. Brown. Tabor bought land east of Larimer Street and wanted the city to develop to the east. To encourage such growth, he built the famous Tabor Grand Opera House on the corner of 16th and Curtis streets.

About this time building began on the site Henry C. Brown donated to the State of Colorado for the capitol, on the brow of a hill looking west towards the mountains. The ridge was known as Brown's Bluff, a Victorian double entendre referring to the folly of developing land so far from downtown. These two acts served to turn the growth of Denver's business district eastward. As the business district advanced, the residential section moved ahead of it and occupied the "high, sightly prairie" known as Capitol Hill.

By the end of the 1880s, Capitol Hill was completely platted and a sizeable amount of development had occurred east of the Capitol and along the trolley lines on Colfax to Alta (now known as Ogden Street).  It was on Capitol Hill that Colorado's wealthy built their mansions. The architecture was as eclectic as its inhabitants, from early Greek Revival to Tudor to Victorian. The Molly Brown House (listed as a Denver Landmark and also in the National Register of Historic Places), is one of the remaining houses from this early period. The prominence of Capitol Hill as "the" fashionable residential area continued until after the turn of the century, but as the city grew and prospered, the wealthy began to move further south and east to the Country Club and Cheesman Park areas.

The neighborhood offers perhaps the city's widest range in housing types and price ranges--everything from high-rise apartments to single-family homes, apartments in historic mansions, to lofts in renovated commercial buildings. Population density is now one of the highest in the city. Today, fewer than 4 percent of the structures in Capitol Hill are single-family units, 22 percent of all units are converted homes or small apartment buildings, and almost 75 percent are in large apartment buildings or complexes.

See below for the latest homes for sale in Capitol Hill or call us today to begin your search!

Amazing opportunity to own a turnkey condo in a quiet building in close proximity to everything Capitol Hill and Cheeseman Park have to offer. Located 6 blocks west of t...

VIEWS, LOCATION, OPEN FLOOR PLAN, GREAT REMODEL! This rare high-floor unit at The Lanai is one of the best in the building. Come home to an open, light, bright unit with ...

Bright and Spacious 1 bed 1 bath condo in the heart of Denver! This move-in ready home boasts hardwood floors and an efficient floor plan. Your kitchen is updated with be...

STUNNING REMODEL IN CAPITOL HILL WITH ALL THE RETRO CHARM*Come check all of the details*ALL NEW PELLA WINDOWS and Anderson Doors. ALL NEW LIGHTING throughout. Gourmet Kit...

Updated and move-in ready end-unit in the Versailles. The Versailles is an 11-story mid-century modern high-rise located in the heart of Governor's Park. This updated uni...